Response to ShoutCry Room is a multimedia collaboration between myself and performance-maker Rebecca Woodford-Smith, in response to a set of sumi-e paintings and text created by the artist Oi Nuen Sprunt.  The performance took place last October as part of an event entitled Art and Healing at the New Diorama theatre in London.  Oi Nuen’s paintings were hanging in the space and provided the backdrop for the performance.

The full video produced by York Woodford-Smith can be seen on Vimeo below.  The sound has been retained from the original mono camera recording to maintain coherence with the images and the space; a direct line recording will be made available later.

Since Rebecca and I are currently based in Aberstwyth and London respectively our collaboration primarily took place over the internet over the course of several months, with one rehearsal in the studios at Middlesex University before running through it in the venue on the day of the performance.  The audio was pre-recorded, but the various channels were mixed to fit the performance space on the day and certain sections were triggered in response to Rebecca’s movements.

Rebecca’s creative and performance processes are largely linked to embodiment of images and emotional stimuli – what she describes as “finding ways of using the body to give form to memory”. Having started with the paintings and Oi Nuen’s own description of her experience creating them, we worked from a selection of written images, paintings and photographs that Rebecca had chosen as sources to draw on for movement.  From here I attempted to develop what might be called a more conventional score (an early version of which is pictured below), although our communication largely remained based around verbal discussion.  It quickly became apparent that anything along these lines would be more of a guideline or reference point for a more fluid feedback process. We frequently used the ability to place time-specific comments on SoundCloud to discuss various sections from my audio sketches, which Rebecca worked with independently in her studio space to create the movement. 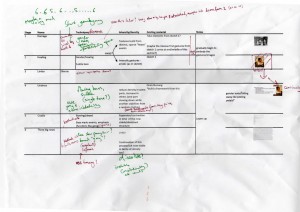 The audio side of the piece was developed using the collection of gendèr and bonang-type instruments I had gathered for the Augmented Gamelan performance in the Union Chapel earlier in the year (pictured below at a recording session at Hampstead Voice and Music Studio), and the composition framework I had been working on called Mipilan.  Up until this point I’d been using this setup for arrangements of traditional material, and I’d been finding it difficult to break out of this approach. 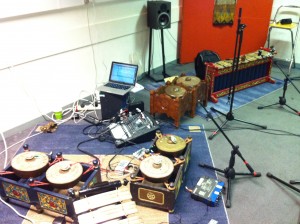 My own personal aim for this project was to move towards what I could call an original composition, finding ways to integrate non-idiomatic material while maintaining some sort of link with the traditional aesthetic and roles of the instruments.  I made a conscious effort to work texturally, spending time trying to deconstruct the sounds of the gendèr with extended bowing techniques and computer processing, in keeping with the given theme of damage and attempting to respond to the images that Rebecca had provided me with.  I sent sounds through the bonang using transducers, incorporating the extraneous sounds of traffic and rain into the composition, amplifying them through the resonance of the instruments.  This would eventually accompany Rebecca’s movements in the first section, culminating in a spinning gesture set to the clattering of metallic impulses drifting out of phase, slowing to near silence.

Chance operations also formed a vital part of the process, initially as a way to move past old habits of referring back to traditional gamelan structures.  Some of the sections were created using dice to determine the pace of otherwise fairly regular parts such as the kethuk, which were subsequently elaborated upon using patterns derived from traditional techniques within Mipilan.  At times it was impossible to deny the weight of convention; low sine tones formed punctuation for key moments, mimicking the deep beating pulse of a gong in a gamelan that would usually signify the end of a phrase or cycle.  Here I tried to explore the borders of the sounds’ established functions, extending them in time, introducing them gradually, and blending them with contrasting bursts of noise that would shoot off into other sections.

The foundation for the final part of the piece is based on a traditional structure, inspired by an arrangement of ketawang Pangkur Paripurna that I had stretched out from a couple of minutes to nearly half an hour through extensions of traditional processes.  The melodic framework in this section was generated at random through the Mipilan software, which provides a combination of synthesised parts and a guide for instrumental playing. Here the synthesised gongs creep in slowly under a bed of granular textures; key moments are emphasised by bowed gendèr, with differences in tunings juxtaposed to create wavering beating tones. This forms a smooth, stable texture that provides a contrast for the return of erratic physical gestures from the first section and the closing of the performance. 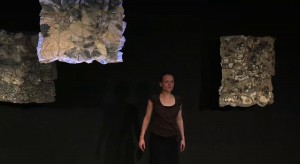 This piece represents a shift in approach and aesthetic for me personally; a move away from restrictions of traditional approaches and fear of pastiche to a more integrated approach.  With this piece I feel I’ve been able to find a space where I feel equally at home exploring raw sonic texture while dipping into established musical idioms.  The experience of working from images and text was quite new to me, although I feel it’s something I’ve often engaged with on a subconscious level.  However, by far the most rewarding aspect has been the collaborative process.   It was an incredible experience to see Rebecca moving with the sound in rehearsal for the first time, to see life breathed into the gestures and atmospheres that we had been discussing via text.  While it would have been interesting to work on the coordination and develop parts in real-time, the long-distance aspect combined with sound communication seemed to afford a certain freedom and integrity to both sides of the work.