Audiences or players are invited to record patterns of light, which are translated into sound and lower frequency vibrations.  While the devices can be used to be used to explore the light in a space through tactile sensation, the information can be looped and played back, creating further patterns that can be transferred between devices.  There is no right or wrong way to “play” them.

The first handheld devices were developed for Hackoustic Village, (part of the We Are Robots festival) in London, 2017:

This page is intended as a brief introduction to the project, and will be expanded with time.

I started playing with recording light and vibrations around 2014, as I was looking for a new interface for the Augmented Gamelan project.  In Augmented Gamelan, a set of traditional Javanese gongs are played using electronically controlled vibrations, turning them into resonant metal speakers.  I was concerned that people were struggling to understand what was going on on the stage, and it seemed logical to have the instruments light up to show which instrument was playing at any given moment. 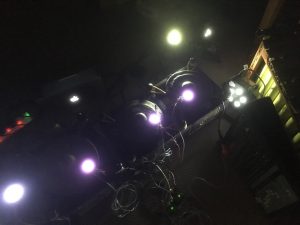 This introduced new problems – I didn’t just want this to be a flashy light show! So since then, I’ve felt quite determined to make sure that there are direct connections: that the light affects the sound and vice versa, in a feedback relationship.  This is probably best demonstrated in this first demonstration video created for students on the Arduino/Sonic Arts course at City Lit:

Around the same time, I started working with Drake Music on accessible musical technology, including a set of bespoke musical instruments designed to be played outdoors in Planted Symphony.   Rather than claiming to address specific impairments, events and instruments like this provide more options for different means of access, and hopefully more freedom to explore.

Furthermore, the aesthetics of a piece are influenced by these access decisions: whether incorporating BSL performance, removing physical barriers on a stage, or emphasising tactile sensations as much as cochlear-oriented sound. The idea of the aesthetics of access was pioneered by Graeae theatre company: read more here. Rather than being thought of as accommodations, distractions, or even annoyances, I believe that these elements can and should be recognised as integral parts of the work, in constant feedback, open to shaping the experience – like bringing the lights to the gamelan needed an integration of process to make it feel authentic.

I can’t claim that the current project is more accessible than any other. However, it seemed logical to extend this idea to my own practice, and invite audiences to collaborate, just just by interacting in the moment, but by shaping whole pieces in the longer term, the design processes, and applications.

Up to this point, my visual aesthetic as a performer or sound artist (not that I’m ever sure that I identify as one) have been rough and ready, processes and crocodile clips exposed for all to see.  Through working with Drake Music and starting to teach sonic art elsewhere, I learned some valuable lessons about how this exposure of technology can set up certain expectations, and become a barrier as much as demystifying the process when it comes to opening up access to the work as an interactive device. So for the first time, I’ve been interested in exploring construction as well as assemblage in this project.. I signed up to a sculpture course at City Lit, and started making enclosures – working with papier-mâché, textures, scents..

The project took a further unexpected turn when I met Education Makers at one of their Maker Jams in Montreal, and found myself 3D printing cases within the evening.  With this new-found resource, I’m looking at ways of making these designs producible more reliably, and of course, opening them up to modification.

The most recent version of the devices, which I created to be played in the Colourscape Festival in 2018, adds sensitivity to different colours.

Watch this space for more information, including technical details.