Charles Matthews is a UK/QC-based artist who makes unusual electronic instruments in the name of access. 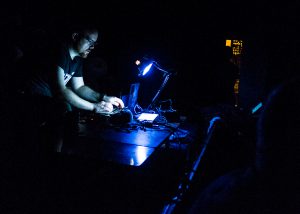 Charles Matthews is a musician and creative technologist with a focus on access.  As an artist, he primarily works with combined light and vibrations (see for example: Light Recorders, Augmented Gamelan, and Jo-Anne Cox’s Defiant Journey).

Charles has worked closely with UK-based organisation Drake Music for several years, developing (among other things): a custom guitar with musician John Kelly (called the Kellycaster), an outdoor installation featuring digital instruments with a variety of sensors (Planted Symphony), and a musical lazy susan designed to encourage turn taking in classrooms.

Charles is currently developing the Haptic Baton with Human Instruments, and has created an open source framework called instrumentmaker.org, which forms the basis of workshops in collaboration with Montreal-based musician Gift Tshuma through their project Blurring the Boundaries.

Charles Matthews is a multidisciplinary artist currently based in London (UK). He is proud to identify as Neurodivergent, has described himself as an “outsider maker”, and from time time also makes sounds identifiable as music. His current work explores themes of access and cross-sensory engagement, with a focus on shifting perceptions of working with technology.

Having developed an interest in augmented instruments through his PhD research in composing for gamelan and electronics, current projects include: instrumentmaker.org (a framework for developing custom instruments including a library of AAC symbols), Light Recorders (an ongoing installation project featuring handheld devices that record patterns of light and translate them into vibrations), and the Haptic Baton (an augmented conductor’s baton in collaboration with Human Instruments).

Charles has worked extensively with Drake Music (a UK-based organisation seeking to break down disabling barriers to music), starting with a collaboration with musician John Kelly on the creation of a bespoke accessible guitar called the Kellycaster.  More recently, he created a set of electronic instruments for Planted Symphony (an interactive garden created by Drake Music and Arts & Gardens for the Liberty festival in the Queen Elizabeth Olympic Park), which has led the development of several multisensory instruments and resources for schools.

Charles Matthews is a performer and composer working in London, UK. Charles first began experimenting with noise and industrial music as a teenager growing up in Japan. Since 1999 he has released experimental dance music as Ardisson, including several 12″s on Seed Records. His performances often combine vinyl, custom tools developed in Max/MSP, drum machines, synthesisers, and feedback.

More recently Charles’s focus has shifted to the combination of gamelan with electroacoustic music, which formed the subject of his recent AHRC funded PhD research at Middlesex University.  He has studied in Indonesia at the Institute of Arts (ISI Surakarta), and joined various community groups in performances of traditional music. He is currently working on a project called Augmented Gamelan: a chamber ensemble incorporating instruments modified with transducers.