The EMG Rebab was created as part of the Drake Music DMLab Challenge in summer 2016.  For more information on the challenge and other entries, see this article on the British Council website.

The rebab is one of the most difficult instruments in the gamelan to play.  This electronic version of the instrument uses a pair of ribbon controllers to emulate finger position on a string, while the bowing is emulated by a muscle sensor.  The sound is produced by a synthesiser with built-in speaker – no need to connect to a computer or amp. 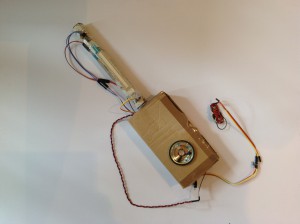 The physical construction was completed in just under a week, using a recycled cardboard box as a body and tube rescued from a package of incense for the neck, alongside cheap sensor components and a Bela board at the heart. I set myself the challenge of playing a traditional piece by the day of the presentation, which can be seen here.  It was an absolute joy to play alongside fellow Southbank gamelan player Sophie Ransby for the first time in this video, working our way through the traditional welcoming piece Wilujeng.

The instrument also has an optional flex sensor as a replacement for the muscle-based bow (this video demonstrates an attempt at physical modelling synthesis):

Update: the instrument has survived, despite being made of cardboard! Here’s a participant from a recent Northern Gamelan Network workshop exploring the rebab using the flex sensor: